Limited Edition of 125 The Hell’s Angels Letters: Hunter S. Thomson, Margaret Harrell and the Making of an American Classic

The month of July in the Canessa Gallery, San Francisco 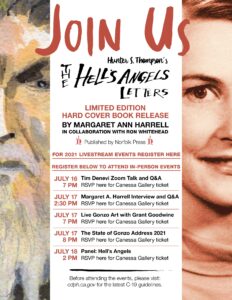 Friday evening, July 16—7 p.m. A 20-minute Zoom talk by Tim Denevi discussing Hunter’s development and growth as a writer during the time he wrote the Hell’s Angels article and the book. Followed by 15–30 minutes of Live Q & A from Margaret Harrell and Ron Whitehead.

Saturday afternoon, July 17—2:30. A Live performance in Canessa Gallery. Journalist David Streitfeld will interview Margaret A. Harrell, author of The Hell’s Angels Letters, for roughly a couple of hours, including Q & A and then book signing. A spontaneous interview by a master interviewer who interviewed Hunter multiple times—no prepackaged answers. Everything improvised and spontaneous.

Saturday evening—8 p.m. )Live): “The State of Gonzo Address 2021: Hunter S. Thompson Crazy Wisdom Visionary.” A 20-minute talk by Ron Whitehead, followed by a 20-minute talk by John Brick, PhD candidate,  on his research for his Marquette dissertation, Gonzo Eternal, ending with a 15-30-min. Q & A.

Topic: a panel consisting of William McKeen and Dr. Rory Patrick Fehan (on Zoom) and (in the Canessa Gallery Live) David Streitfeld and Peter Richardson will discuss “Hell’s Angels as a bridge to Hunter becoming the Gonzo figure in Fear and Loathing.” This is the fiftieth anniversary year of Fear and Loathing in Las Vegas (1971).

Grant Goodwine is a Louisville-Based Illustrator who has long been affiliated with the GONZO movement, including helping illustrate The Hell’s Angels Letters and annual posters for Gonzofest and even for Churchill Downs to help celebrate Hunter’s “The Kentucky Derby Is Decadent and Depraved.” Grant puts in his effort to help conserve Hunter’s Legacy along with hopes of keeping Gonzo going.

Margaret A. Harrell is a three-time MacDowell Colony fellow, who was Hunter’s copy editor and Jim Silberman’s assistant editor on Hell’s Angels at Random House, as well as working on many successful books there. With degrees from Duke University and Columbia University, she studied three years at the C. G. Jung Institute Zurich. She has lived in the U.S., Morocco, Switzerland, and Belgium and has fourteen published books, including the Keep This Quiet! memoir series and The Hell’s Angels Letters. Multifaceted, she is an author, editor, advanced meditation (light body) teacher and experimental cloud photographer.

Ron Whitehead, poet, writer, editor, publisher, professor, scholar, activist, is the author of 24 books and 34 albums. Ron has produced thousands of events and festivals, including 24 & 48 & 72 & 90 hour non-stop music & poetry Insomniacthons, in Europe and the USA. He has presented thousands of readings, talks, and performances around the world. He has edited and published hundreds of titles. The recipient of many awards, his work has been translated into 20 languages. In 2018 Louisville Mayor Greg Fischer presented Ron with a Lifetime Achievement for Work in The Arts Award. In 2019 Ron was named Kentucky’s Beat Poet Laureate and was also the first U.S. citizen to be named UNESCO’s Tartu City of Literature Writer-in-Residence.. He is co-founder and Chief of Poetics for Gonzofest Louisville. Outlaw Poet: The Legend of Ron Whitehead documentary will be released by Storm Generation Films/Dark Star TV in 2021.

David Streitfeld is the editor of Hunter S. Thompson: The Last Interview and Other Conversations (Melville House, 2018). The Last Interview series, which he edits, includes such authors as Gabriel García Márquez, Philip K. Dick and J. D. Salinger. He is a reporter for the New York Times, where in 2013 he was part of the team awarded the Pulitzer Prize for Explanatory Reporting. He has won various other prizes for his journal­ism. In the past he worked for the Los Angeles Times and the Washington Post.

William McKeen is a professor and the Chairman of the De­partment of Journalism at Boston University; he is the author or editor of thirteen successful books, including Outlaw Jour­nalist, Mile Marker Zero, and Everybody Had an Ocean. McK­een teaches courses on journalism history, literary journalism and rock n’ roll and American culture and previously taught at Western Kentucky University, the University of Oklahoma, and the University of Florida, where he chaired the depart­ment of journalism.

Rory Patrick Feehan, PhD, is a Hunter S. Thompson Schol­ar and the founder of Totallygonzo.org. He graduated with a doctorate in English Language & Literature from the Uni­versity of Limerick in 2018. He has spoken at the Louisville Gonzofest and at the Speed Art Museum, Louisville, on the opening night of their exhibit Gonzo: The Illustrated Guide to Hunter S. Thompson. A regular contributor to Beatdom, he has also recently contributed a piece on Thompson to the ency­clopedia American Political Humor: Masters of Satire and Their Impact on U.S. Policy and Culture.

Tim Denevi is the author of Freak Kingdom: Hunter S. Thompson’s Manic Ten-Year Crusade Against American Fascism (PublicAffairs, 2018) and Hyper: A Personal History of ADHD (Simon & Schuster, 2014). His essays on politics, sport, and religion have recently appeared in The Paris Review, New York Magazine, Salon, The Normal School, and Literary Hub. He received his MFA in nonfiction from the University of Iowa, and he’s been awarded fellowships by the MacDowell Colony and the Virginia Center for the Creative Arts. Tim is an assistant professor at George Mason University and lives near Washington, DC.

John F. Brick is a Ph.D. candidate in English at Marquette University in Milwaukee, Wisconsin. He specializes in American literary journalism of the 1960s and ’70s with a particular focus on Hunter S. Thompson and Gonzo journalism, and among his long-term career goals is to see the burgeoning niche of Thompson studies coalesce around centralized, comprehensive archives.  To that end, his work involves locating and cataloging—occasionally from unusual places—material by and about Thompson heretofore unknown to literary scholarship.  Alongside his dissertation, Gonzo Eternal, Brick is also presently compiling a thorough annotated variorum of Thompson’s seminal Fear and Loathing in Las Vegas (but don’t tell his dissertation director about that).

Playing on the Big Canessa Screen – during the month of July

ARTIFACTS for the Walls