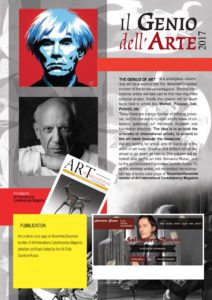 A section of the November/December 2017 issue of the magazine Art International Contemporary, published in Palermo, Italy, was called ‘’Il Genio dell’Art,” or “The Genius of Art.” “Sun Spotlight on Faces” was accepted into it. The publisher curators placed a selection of contemporary art such as mine after works by well-known artistic geniuses such as “Picasso, Dali. Pollock.” That way, the magazine reaches the hands of “a public strictly made of collectors, gallerists, art merchant, museum and foundation directors.”

In a September art event, the publication The Best Modern and Contemporary Artists 2017 was launched in Berlin at the Georges-Casalis-Hall. It is curated in Italy. And I was invited into it. How I would have loved to attend in person (sigh). The location was the Französischer Dom.

An condensed online description reads: “You won’t get any more central that this. The French Cathedral (called the Französische Friedrichstadtkirche or the Französischer Dom) stands in the middle of Gendarmenmarkt in Berlin’s historical city centre. As a

venue for receptions, events, conferences and cultural events, it has the best possible location in Berlin . . . The great hall, with its 700 square metres, has room for 500 – 600 guests. A further highlight of the French Cathedral is the stunning Georges-Casalis-Hall – an oval room with wooden parquet floors – perfect for lectures, conferences or receptions for 100 to 150 people.”

Another online description adds “The edifice commonly known as the Französicher Wikipedia gives a little history:

Französischer Dom (the term is German for “French Cathedral,” but in the case of Gendarmenmarkt, Dom refers to the French word for English “dome” and not to a cathedral. Neither church on Gendarmenmarkt was ever the church of a bishop. . . .

Louis Cayart and Abraham Quesnay built the first parts of the French Church from 1701 to 1705 for the Huguenot (Calvinist) community. At that time, Huguenots made up about 25% of Berlin’s population. The French Church was modelled after the destroyed Huguenot temple in Charenton-Saint-Maurice, France.