Dhyanyogi Madhusudandas-ji was a Hindu master spiritual teacher – to be exact, a Kundalini Maha Yoga sat guru who “left the body” in India in Samadhi on the birthdate of the Hindu god Krishna—in the summer of 1994. Born in the late nineteenth century, he was 116 or 117 years old. It was well known that Dhyanyogi-ji was a devotee of Lord Hanuman, a Hindu god of service in the form of a monkey. According to Hindu teachings, “When Lord Vishnu incarnated as Rama on earth, Lord Shiva took the form of Lord Hanuman as a monkey to serve his master. In Indian spiritual history, there never has been, and never will be, a devotee so complete and profound as Lord Hanuman.”

Below is a photograph I took that appears to me to have the image of Lord Hanuman clearly in it:

Read stories of  Shri Dhyanyogi, an important spiritual master of the pure kind who lived most of his life in India, and how he affected and taught Margaret in Keep This Quiet! IV, Revised Edition. With thanks to the Dhyanyoga Centers for allowing the cover photo.

“I finally got a chance to read through all of the sections . . . about Guruji Dhyanyogi-ji] and Anandi Ma and I am blown away! Thanks to Margaret for writing all of these wonderful stories! She is such a gifted writer.”
—Jan Handel, Dhyanyoga Centers Antioch, administrator and meditation instructor

“Margaret Harrell is a skilled professional writer with excellent ability to communicate and weave esoteric ideas about science, psychology, philosophy, and spirituality. Richard Unger’s channeled hand analysis description of her as a ‘grand synthesizer’ was apt and accurate.”
—Ron Rattner, author of the forthcoming From Litigation to Meditation: An ex-lawyer’s spiritual metamorphosis from secular Hebrew to born again Hindu to uncertain Undo; Ron is the founder and chief writer for www.sillysutras.com

Below is an excerpt, “A Brief Glimpse at Guru-Psi,” from my Love in Transition: IV, p. 386

In October 1978 in Sacramento the yogi Dhyanyogi [Guruji] was sitting in a workshop, in which a medical doctor had recorded blood-pressure and temperature changes during mantra chanting. After finishing the experiment, Guruji wanted to play with the doctor who was taking the temperature and blood pressures, Alan Lee, M.D., so he began to increase and decrease his blood pressure by his yogic powers. After a few tests registered widely different readings, “Guruji asked the doctor what he should do and what advice he could give due to the vastly changing blood pressure. The doctor was embarrassed and said that he could give no advice because he had never seen blood pressure change so radically in such a short period of time. Guruji asked the doctor what was real. Were the tests real, or was the doctor real or was Guruji real? Everyone laughed and the doctor realized Guruji had been playing a game with him.”

The doctor was at the workshop to record the shifts in blood pressure and temperature of meditators, as a result of Guruji’s chanting what is called the Bija Mantra: “a series of sounds corresponding to the letters inscribed on the various petals of each chakra?” In some ways “before” his time, though working in ancient techniques and traditions, Sri Guruji Dhyanyogi was interested in furthering scientific tests of yogi techniques and participated in tests—such as the above. But he ultimately returned to India . . . This [experimentation with sound] is only at its threshold of being explored in the West now. However, not continuing the scientific tests “in the body,” Dhyanyogi did, out of the body, align with events which he is often associated with. Some of that Guru-psi was witnessed by this author, in the conjunction of a movie scene in a dream with a real-life plane crash warning, followed by a wing fire in the plane at takeoff (no crash, only a wing fire). The test continued to unfold when the movie (previewed in the dream in conjunction with the plane-crash warning) then showed up on TV in the future (it had been filmed in the past). Guru-psi works in nonlocal time. As does Quantum Mechanics on the particle level. This is the “macro”-, or large-scale, as opposed to the ultra-minute. But what do the two have in common? 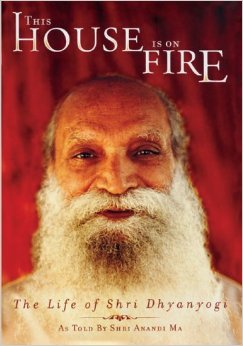 A small boy runs off to the Himalayas to become enlightened and a young girl astonishes her family by entering mystical states of consciousness. These are the true stories of Dhyanyogi and Anandi Ma. They are not legendary figures from centuries ago, but saints of our own time whose extraordinary lives are chronicled by eye witnesses. Every page of this book is a treasure.

– Linda Johnsen, M.S., author of Daughters of the Goddess: The Women Saints of India and The Complete Idiot’s Guide to Hinduism

You can also read a beautiful story about his compassion here.