Read newly compiled, still vibrant Milton Klonsky essays in Commentary in the 1950s and 60s here. Only in this new web-inspired world would this be possible, but he’s there, with never-before-seen writings; that is, never seen except in the original Commentary issues. Also, for a reservoir of his wisdom and dry wit – sayings to ponder through the ages – click to read Keep THIS Quiet TOO! More Adventures with Hunter Thompson, Milton Klonsky, Jan Mensaert, where his sharp mind is on view. Choose print or e-book.

Milton Klonsky is a key player in the Keep This Quiet! series. Below is an introduction of sorts. Considered a guru/hipster (or, as he preferred, a “gangster poet”), and “with an IQ that can stutter your butter,” as a critic put it, he always spoke in quotable phrases, such as:

I’m famous, not so much for what I’ve written . . . as for the cyclotron of my personality.

I’m a teabag, steeped in life.

I’m like an airplant, not rooted in anything. Certainly not in earth.

Cyclotron: “a type of particle accelerator invented by Ernest O. Lawrence in 1932 in which charged particles accelerate outwards from the center along a spiral path. The particles are held to a spiral trajectory by a static magnetic field and accelerated by a rapidly varying (radio frequency) electric field.” (Wikipedia) 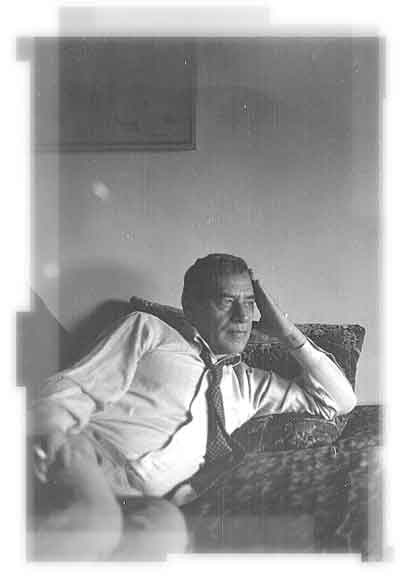 From The Hudson Review Editor, Frederick Morgan, in his Letter to Me 26 March 1993

Correcting reports about the history of Chimera and The Hudson Review, where some of Klonsky’s articles appeared, Morgan records the exact details of their founding, for the record—for any who have not been able to trace the derivation of these two trademark literary “institutions” of NYC:

Chimera and The Hudson Review were never the same magazine, but were founded by different people, had different aims, and different histories.

The two were, then, . . . separate enterprises. . . . Coming back to Milton Klonsky: [William] Arrowsmith and [Fearon] Brown deserve the credit for publishing “The End Pocket” [by Milton] in Chimera; I deserve credit for the later things, that were published in The Hudson Review. I wrote to him after the war, told him how much I liked “The End Pocket” and asked him to send things to The Hudson Review. I have a letter from Milton Klonsky which I treasure. It’s dated April 30, 1954, and in it he says, “I think The Hudson Review is the only literary magazine today which maintains the highest literary standards without starch or pomp. I hope it goes on for a long time.” We have managed to go on for a long time—I wish Milton Klonsky had been able to do so too.

For anyone who wants a longer official account of the founding, available in this letter, just email me.

The text below is an extract from “Milton Klonsky,” in What’s This Cat’s Story? —by Seymour Krim. Krim has been described as “one of the most important figures in the dramatic change in non-fiction letters that took place in the last thirty years; someone whose writing had “cracked honesty”; who shows “how much a man can know and learn if he is serious and keeps his dignity.” These comments come from reviewers on the back cover of the book, that anthologizes four decades of Krim’s essays—some about New York City—in the “high-velocity argot” of a writer who is “almost scarily evocative.”

The reviewers are James Dickey, David Halberstam, Norman Mailer, Murray Kempton and Pauline Kael, who hold the posthumous collection in high regard. The excerpt below is in honor of Krim’s and Klonsky’s friendship and mutual contributions. I met Krim only once. I liked him. He called me “Red from Random House.”

Krim starts his story describing repeated encounters with Milton Klonsky before they met; he would “brush past” him in the courtyard of his apartment building: “I had to walk past the inhuman guns of his eyes” (p. 68). He goes on vividly:

Klonsky’s personality was a subtle, forceful and, later I was to recognize, deeply profound one and it entered my being—tore through it actually—like a torpedo into the unguarded gut of a battle-innocent young cruiser. I had never met anyone even remotely like him nor could I have conceived him in my imagination. Instead of being direct (my holy-grail kick at the time, encouraged by the prose of Hemingway, Eliot, Pound, which made a glistening literary virtue of straightforwardness and which I translated into an ethical ideal—even then trying to convert beauty into life-action!) he was indirect, elusive, paradoxical, frowning, iceberg-cheerless often. And yet one always had the impression, felt the impression I should really say, of a fine and deep mind that was fixed like a rule beyond the every flare of mood, behind his furrowed swarthy face (now Roman-looking, now Jewish, now Spaniard) and in back of those special catlike eyes. The guy’s strangeness, uniqueness, was heaped further on my barometric apparatus by his style; although quotations from Blake or Hart Crane or Wordsworth—in fact most of the whole noble repertoire of English-speaking verse—sprang to his dark purplish cracked lips at appropriate moments, he electrically spit out the language of the ballpark and streets too [p. 69].