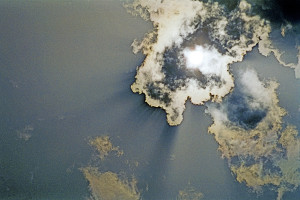 The irregularity of the cloud first got my attention. In the original shot, the white in the center was so bright you couldn’t see the sun. Then when the negative was drum scanned, the sun became visible. But the image then got darker. When first developed, in film, unscanned, the irregular edges were very bright. In digital format, I’m now juggling to keep the sun visible while trying to recover some of the bright light around it without blowing out the sun itself. In experimenting with light in taking these photos, I learned a lot about perception: how when you make one thing visible, you might lose visibility in the opposite end of the spectrum. Nothing goes away. Just that some things become invisible. Click on the images to enlarge them. Click again – the size changes again.