Sometimes my computer jumps in – not much anymore since I returned to live in North Carolina. But it used to make these variations from what was on the screen all the time, in the 1990s in Belgium. I have been digging into my archives to try to find things to throw away. Mostly I find things I had forgotten about and that intrigue me. Here is a sample of how the computer rearranged a letter I drafted to Hunter Thompson. As always, when I see these drafts, I am not sure whether I mailed this or something like it. Or nothing at all at that time and on that topic.

Computer PK is illustrated often in Keep This Quiet! IV. “PK” stands for “psychokinesis,” or mind over matter. But I experienced it as a lovely, high-adrenalin creative experience. Like Jackson Pollock throwing paint on a canvas. Only, here no throwing of paint. Just the surprise without the physical act of participation.

Below, dated May 2 (The Proud Highway: Saga of a Desperate Southern Gentleman 1955-1967 was published in paperback by Ballantine in April 1998, presumably that same year) I told Hunter, “I have seen the new edition of your first book sitting on a bookshelf, in front of a Columbia University area store.” I caught him up on my writing – noting that I was about ready to include things I left out before, “as they have a way to come in right.” THEN: “I believe you probably did not understand why I never mentioned you up to here, and were relieved, yet also on the other hand, maybe furious. I have consistently left you out, and you replied in kind. It was fair, but it felt quite bizarre” – i.e., bizarre to see the publication of the Hell’s Angels-period letters had absolutely not a word about me. I find this next amusing. I had noticed that in some accounts he gave of “the snake story” (the  snake I kept for him in my Random House office), I was omitted and he himself was (falsely) reported to have kept the snake in his hotel room. In the book of letters, he implies (by leaving me out of this  collection of letters) – that his editor at Ballantine was the one who did what I did. So I dived into the humor. The top paragraph is about “the snake story”; the second is about my intention to include him in my next book:

Here is the relevant excerpt from the original – unaltered – letter I wrote: 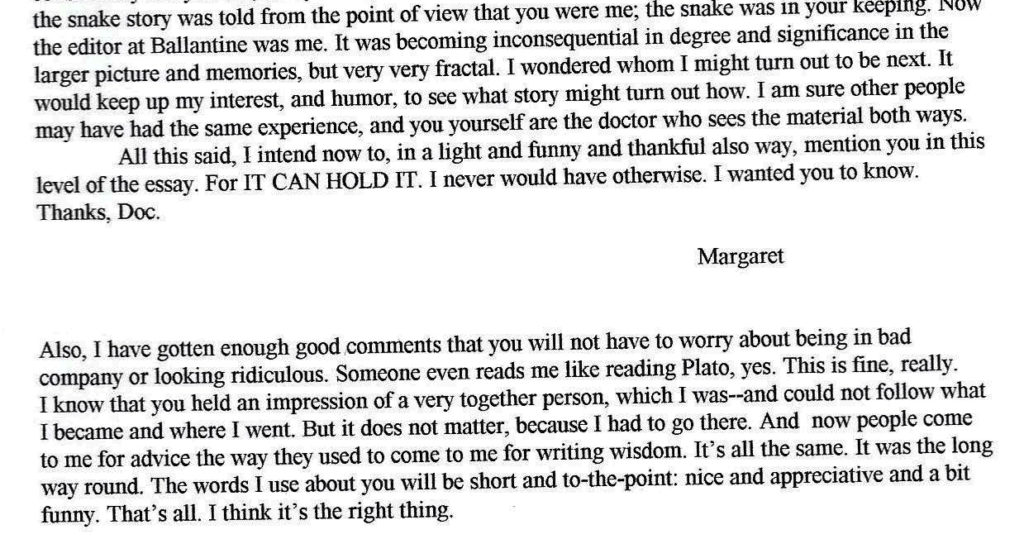 The computer PK version of the above text is below. It starts by squashing the text that precedes “the snake story”:

Another two printouts were both empty pages with a line of symbols/letters at the top, replacing  the strips of squashed text. But no text at all beneath, just empty Space. The two pages had different symbols/text in the line at the top:

There was also a computer PK restructuring of the opening paragraphs.

Needless to say, this was fun. And exciting. My participatory computer kept me in high energy for years. I had to use discipline to stop spending all day testing what new printout variations would pop out of the printer into the room. And deciding which to use in my books. The computer often energized my letters while I wrote them, and I felt the letters that had gone through this treatment then got into the mail in an intensity container, regardless of whether or not I included the PK examples, which mostly I didn’t.

End of the story: In my next book, I did not in fact write about Hunter (except for one paragraph). That one paragraph was the only instance till after he died. And he corrected the omission of me (and others) in the second book of letters. Actually, I understood the reason for the omission from the first book. But it still felt like walking into an alternate reality to read through the letters of that 1966-1967 period. The omission is perhaps why biographers initially got the story about Hunter at Random House wrong, having no accurate references till Keep This Quiet! used his own letters to set the record straight.

Anyway, here you see two people practicing their own brand of craziness in different ways. Hats off to Doc for his unwavering authenticity that so often showed the way. And for his literary, comic legacy as well as journalism breakthroughs.